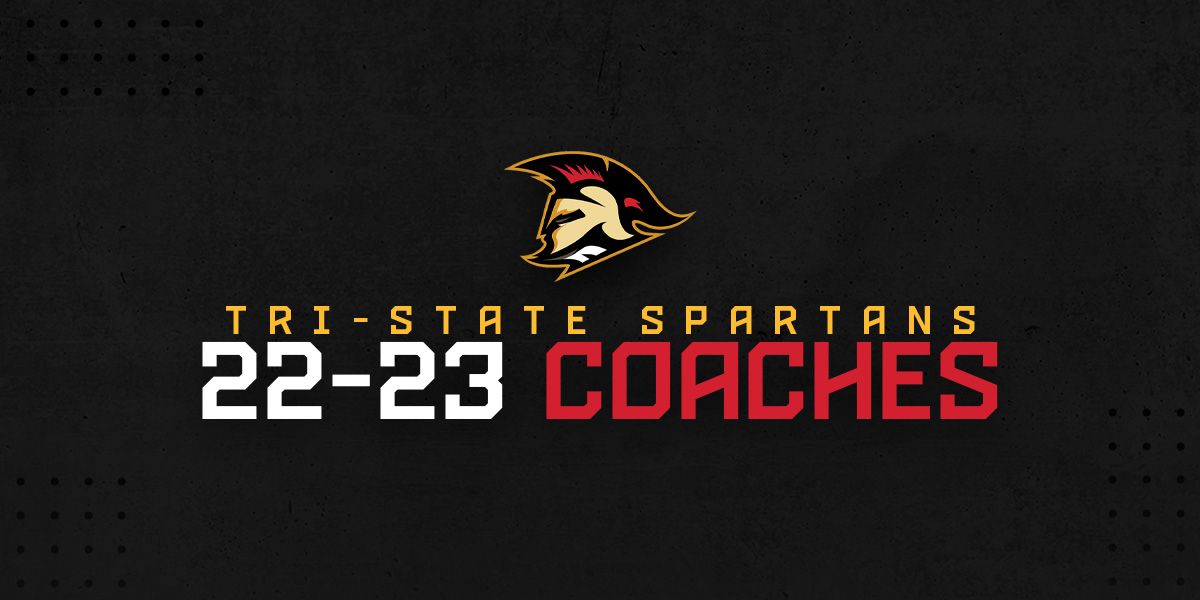 The Tri-State Spartans are excited to announce the Tier I coaching staff for the 2022-23 Season.

Brett Annetts grew up in Estevan Saskatchewan, Canada.  That is where he started playing hockey including 3 years of junior hockey.  He signed with the San Jose Sharks in 2001.  Coach Annetts played for the Sharks ECHL Affiliate in Lexington, KY.  His coaching experience includes taking the Henry Clay HS team to their first state championship.  He also has coached learn to play and 8U for the past 4 seasons, bringing a wealth of experience and knowledge to these young, aspiring players.  He recently was on the bench with the 2022-23 10U Spartans as an assistant coach.  With his experiences, Brett is a great addition to the Spartans coaching staff.

Coach Kremer grew up playing youth hockey in Indianapolis, IN. He played AAA hockey for the Indiana Jr. Ice and played Junior Hockey with Tri-State in Philadelphia, PA and then for the Syracuse Stars. Coach Kremer has coached youth and high school hockey for 5 years as well as at various camps and clinics and as a personal instructor.

Coach Jas played for National Team Slovakia U16 and U17 and then in the Alberta and Manitoba Junior Hockey leagues in Canada for 3 seasons, reaching the rankings for the 1997 NHL Entry Draft. He had a 12-year professional career in the US, with 2 in the European Leagues. He was one of the leading scorers for the 1999-2000 CHL Championship Indianapolis Ice team. After his playing career, Coach Jas began coaching with teams such as the ACHA D1 Indiana University, USHL’s Indiana Ice, Port Huron in the NAHL and as an asst. coach for the ECHL Indy Fuel. At the youth level, he has coached AAA and recently working with 10U and 8U teams locally. He also works with the ISS Hockey scouting agency and recently for a European team, Banska Bystrica.

Coach Banham was drafted by the Washington Capitals and played 1000+ pro games between the NHL, AHL and the top European leagues. With 20 years of professional hockey experience, Frank has been coaching and mentoring youth players for the past 15 years.

Coach Dueling played 4 years in the WHL with the Kamloops Blazers, winning 2 Memorial Cups. He was drafted 56th overall by the New York Islanders. He played seven years professionally in the AHL, IHL and NHL. Coach Dueling has coached with the Spartans in various capacities for many years.

Greg Austin returns to a Head Coach position with the Tristate Spartans. Greg is originally from Canning Nova Scotia and played junior and College hockey in the Maritimes. Greg has 30 years of coaching experience at the College and youth hockey levels including many different birthyear teams within the Spartan organization.

Coach Fraser was the Captain of the OHL Oshawa Generals for a Memorial Cup win, earning MVP Honors. From there he progressed through the AHL to the NHL where he was drafted by the NY Islanders. He has played professionally for over 17 years and has over 1000 games played with the Winnipeg Jets, Dallas Stars, Edmonton Oilers, and San Jose Sharks.

For the past five years, he has served as an Assistant Coach in the ECHL from 2017-2022. Before entering the pro game as a coach and manager, MCGINNIS two seasons supporting the development of youth players, coaching Tier I ‘AAA’ hockey for the Florida Alliance and Phoenix Jr. Coyotes. Before embarking on his coaching journey, McGinnis spent five successful seasons as a player in the Ontario Hockey League, suiting up for the Plymouth Whalers and Oshawa Generals. An additional five playing seasons followed for McGinnis, at both the AHL and ECHL levels. In ten combined Major Junior and professional playing seasons, McGinnis was part of two championship teams, in the OHL with the Whalers, and in the ECHL with the Florida Everblades, served as an alternate captain in Oshawa and was selected in the sixth round of the 2005 NHL Entry Draft by the Los Angeles Kings.

More information and registration for the Tri-State Spartans 2022-23 Tryouts can be found here.